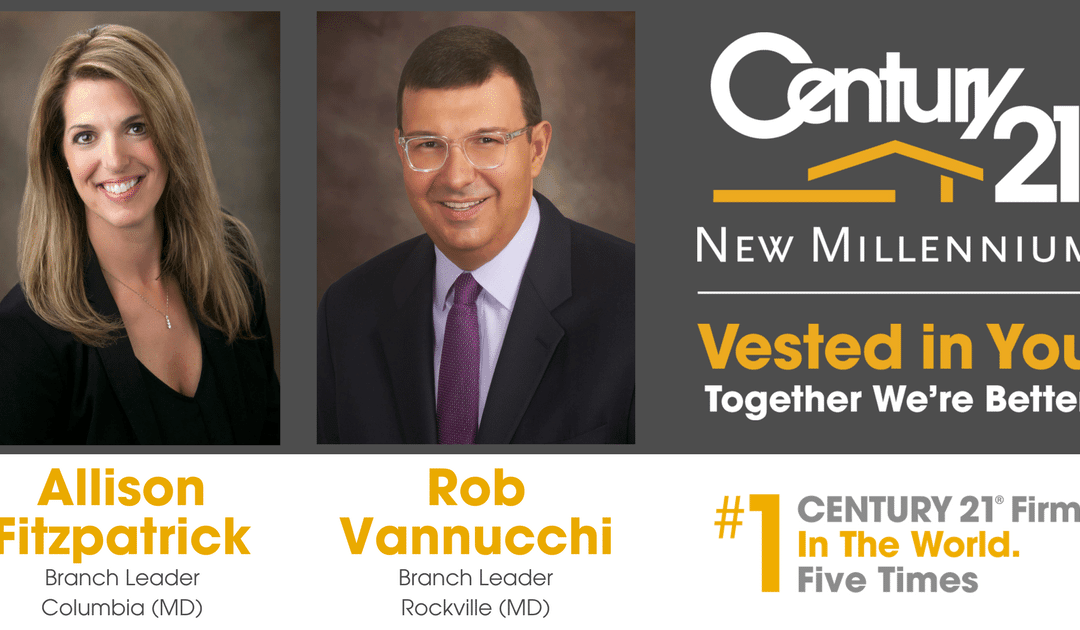 When Tom Harner let it be known that he was ready for a new adventure, he approached Century 21 New Millennium CEO Todd Hetherington and President Mary Lynn Stone to discuss options. “Tom has been a fantastic branch leader in Columbia and a valued member of our NM leadership team,” Stone said. “So, when he let us know that he was ready to scale back just a little, and then added that he already had his replacement, we were all about it.” Tom will continue as the supervising broker for the Columbia branch, and will also be teaching, coaching, and conducting educational seminars and investment workshops.

Allison Fitzpatrick is shifting from her current position as NM’s Rockville Branch Leader to replace Tom at Columbia. “Allie,” who has been an integral part of both the Rockville and Columbia branches for several years, gets to shorten her commute and dedicate 100 percent of her time to Columbia. The agents already love her there, so this will be a popular change!

“So that left us with the challenge to find another high-quality person to replace Allie in Rockville; someone with credentials, someone who knows the business inside and out, someone experienced in coaching and training and motivating and growing,” Hetherington said.” “We wanted someone who could hit the ground running and never miss a beat.” Enter Roberto (Rob) Vannucchi, former office administrator, sales associate, sales manager, license law instructor, broker/owner, industry consultant and regional executive. Rob brings two exceptional decades of real estate experience to our team.

A second-generation REALTOR® and self-proclaimed student of real estate, Rob developed a passion for the business at a very early age and has worked alongside and learned from the best ever, his mom. His professional designations are too many for us to list, but suffice it to say they are impressive.

Rob and his family come to the D.C. area from Stamford, Conn., where he served as a regional Executive Vice President for Douglas Elliman Real Estate and led the combined Connecticut and Westchester County, N.Y., regions with several offices and hundreds of sales associates. Prior to that, he was Director of Sales for William Pitt Sotheby’s International Realty, managing multiple brokerage offices in Stamford, Conn. As if that weren’t enough, Rob previously owned and operated several real estate offices in Palm Beach County, Fla., prior to relocating to the northeast.

Always active in community support, Rob has served on the Boards of Directors for a number of non-profit organizations in his former hometown of Stamford. He has also held membership in several REALTOR® associations and Multiple Listing Services, and has served on various committees and Boards at the state and local levels. We anticipate that he will soon be very active in his new Montgomery County community and will make a great addition to our New Millennium team.

Century 21 New Millennium has long been the top Century 21® company in the Mid-Atlantic Region and has achieved annual sales production volume ranking us Number One in the World five times. The company has 850+ sales associates in 20 locations in Maryland, Virginia and the District of Columbia.