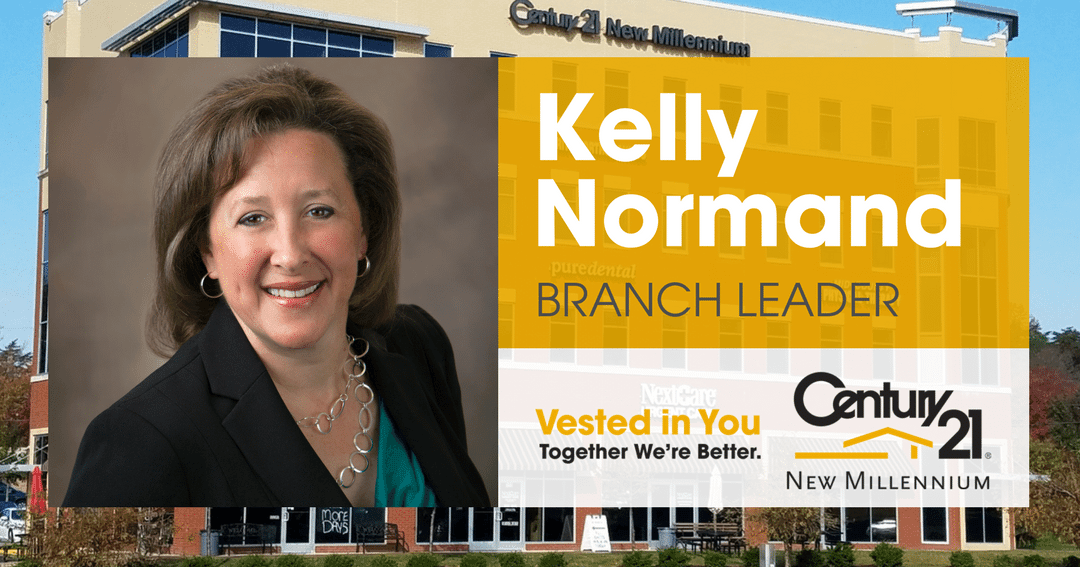 “I love real estate.” That’s how Associate Broker Kelly Normand started our conversation about how she came to be branch leader for Century 21 New Millennium’s Woodbridge office. Her answer may have been short and simple, but her trip to the top floor corner office started long ago, and the road has been paved with commitment and a lot of hard work.

Kelly moved from California to Northern Virginia in 1984 and since then has lived in Arlington, Alexandria, and Fairfax before settling in Prince William County. While earning national recognition as a sales producer and exceptional quality service provider, she became a trainer and mentor for new agents and was the supervising broker for New Millennium’s top-10 nationally-ranked Chantilly office for five years. Additionally, Kelly has been active in her REALTOR® Association, serving as member or chairperson of two committees that deal directly with ensuring high professional standards within the profession. Continuing education has always been important to her and she has earned an impressive number of highly regarded professional designations.

Kelly says that she owes her love for real estate to her mom. “We would go to open houses, walk through builder models and sometimes go into nearby homes under construction to check them out. That’s where it all got started…and (chuckling) she likes to think I owe her a bit of each commission I’ve ever earned. It’s partly that connection to great memories with my mom that makes me still love it so much today.” When she can find the time, Kelly volunteers at a nearby animal shelter and Wolf Trap Animal Rescue.

Century 21 New Millennium President Mary Lynn Stone pointed out that “Kelly Normand is wonderful representative of our organization and our profession. We are very pleased to have her step up to this important responsibility as branch leader in Woodbridge.”

Century 21 New Millennium has long been the top Century 21 company in the Mid-Atlantic Region and has achieved annual sales production volume ranking us Number One in the World five times. The company has 850+ sales associates in 20 locations in Maryland, Virginia and the District of Columbia.

CENTURY 21 New Millennium is a full-service real estate brokerage with more than 900 real estate professionals across 20 offices in the greater Washington, D.C. area, including portions of Maryland, Virginia and the District of Columbia. The company, which specializes in residential and luxury properties, joined the CENTURY 21® System in 1998, and has established a sound and successful organization providing traditional residential and commercial services, on-site mortgage and title services, insurance, and access to a vast network of relocation and other real estate service providers worldwide. CENTURY 21 New Millennium has been the top-producing CENTURY 21 brokerage in the Mid-Atlantic each year since 1999 and has earned the distinction of No. 1 CENTURY 21 franchise in the World recognition five times since 2010. For more information, visit C21NM.com. Vested in You, Together We’re Better.